Welcome to My Favourite Reads, where I chat about the fab books I read the previous month and love hearing you share yours.

Hooly-dooly, the year is slipping away, isn’t it? Hard to believe it’s May already. I thought I was making inroads into my to-be-read pile and then went on a flurry of book buying, sending it towering again. Sigh. Not to worry. There’s no downside to buying books. That’s what I tell my other half, anyway.

I had a couple of DNFs (did not finish) in April which made me sad because I had high expectations for both books. One was by an author whose debut novel I adored, and the other was a new-to-me author whose book sounded truly wonderful and was highly rated. But that’s reading for you. Not every book, no matter how brilliantly written or lauded, is going to float your boat.

Here are the books that did float my boat, with my favourite being… 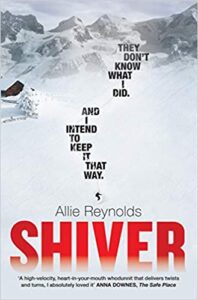 Publishers became so excited when they read the draft of Shiver it ended up in a ten-way auction. I can see why. This book had me hooked from beginning to end. I literally couldn’t put it down. So much so that I ended up giving myself an afternoon off just so I could flop on the couch and finish it.

The setting – an isolated ski lodge – was fantastic and I enjoyed reading about the snowboarding world and its competitions, and the (rather hair-raising) risks involved. But it was the mystery and all its twists and turns that kept me hooked. The constant raising of the stakes combined with the isolation and claustrophobia of the lodge made Shiver a highly compelling thriller. I also enjoyed the dual timelines.

Loved it and look forward to whatever Allie Reynolds produces next.

This is book one in the Six Stories series. For some reason – most likely I saw a rave review, or it was on sale – I read book three first (my thoughts on Changeling here) and enjoyed it so much it made me want to gobble the whole series. So now I am.

I love the premise of this series. It’s based around a podcast, produced by a mysterious journalist named Scott King. Each book is divided into six stories, or six podcast episodes, during which King investigates a murder, solved or unsolved, that still has questions surrounding it. In this case, it’s the death of a teenager at a wilderness lodge.

Nothing is what it seems in Six Stories. Terrific twist at the end.

According to the Amazon profile, film rights for Six Stories have been sold to a major Hollywood studio. I’ll have to keep an eye out for that. With its extraordinary cast of characters, it’d make a cracking film.

I’ve bought the remaining books in the series already. Next up, Hydra. Rah!

The Devil’s Gate by Malcolm Richards

Wow. What an end to The Devil’s Cove trilogy. The Devil’s Gate was seriously full-on and so, so good.

Again, I can’t tell you anything about the plot because it would likely spoil books one (The Cove, which I talk about here) and two (Desperation Point, my thoughts here), and I would not want to spoil this chilling and compelling Cornwall-set series for anyone.

If you like page-turnery thrillers that edge toward horror, then check this trilogy out. In the meantime, I’ll be eagerly awaiting Richards’ next release, Circle of Bones.

Secret Billionaire on her Doorstep by Michelle Douglas

Ooh, I do love me a Michelle Douglas romance!

And she did not disappoint with her latest release. I found Secret Billionaire on her Doorstep a highly emotional story, with a lot of depth, a nice dash of humour, an exciting setting and loads of warmth.

I just adored the characters, especially Callie who was so bright and lovely and fun. Even Frances, who was dead, felt alive, and Callie’s mum was well done too. Then there’s the deliciously oily Richard…

As for Owen, he can be my neighbour any day. Ooh, and how could I forget Barney? So sweet.

Another wonderful read from Ms Campbell. Not only was there lots of scrumptious passion, The Highlander’s Forbidden Mistress gave me plenty of heartstring tugs too. Exactly what I want from a romance.

The characters were wonderful, especially Selina who was so determined to give herself over to pleasure before marrying the odious but well-to-do Cecil (and he was brilliantly odious). She was bold and lovely and just what secretly vulnerable uber rake Brock needs.

This is the second Kate Clayborn novel I’ve read (the first was Love Lettering which I talk about here) and it will not be my last. Her romances take my breath away.

This was soooo close to being my favourite read for the month. It was only the sheer page-turnery drama of Shiver that nudged out Beginner’s Luck.

Beginner’s Luck is the first in a trilogy of romances that follow the fortunes of three close friends who happen to win a small fortune in a lottery. This opening story follows scientist Kit and her relationship with recruiter Ben. Kit is happy with her life, with no desire to change jobs or move from the town she now calls home, no matter what Ben’s company can offer. That should be the end of that, but Ben has his own ambitions and recruiting Kit could see them come real.

Lots of conflict, loads of romance, friendship, family, childhood scars… they’re all in Beginner’s Luck. And did I mention beautiful writing?

Book two, Luck of the Draw, is now on my must-read list.

A Matter of Heart by Megan Mayfair

What a lovely novelette! This little book is a freebie for Australian author Megan Mayfair’s newsletter subscribers, and it was sweet and romantic and full of warmth. The romance in A Matter of Heart was also a bit unconventional, which I liked a lot. It made me smile.

Oh, and there’s a man in uniform. Enough said.

What have you read and loved lately?