THE ROAD FROM THE PAST

I’ve always loved history. As a child I was fascinated by the ancient Egyptians and would spend rainy afternoons in front of the heater, trying to teach myself how to read and write hieroglyphs. Then the civilisations of central and south America caught my imagination, followed by the standing stone circles of Avebury and Stonehenge. And who could ever resist the tales of King Arthur and his heroic knights?

Even now I adore documentaries and books on ancient times. But a move to France in 2003 set my mind soaring. So many legends, so much myth. So much history to explore and breathe. I couldn’t get enough of it.

I learned about Roland’s legendary sword Durendal during our first real holiday, when Jim and I decided to go on a road trip. We didn’t book anything, simply packed up, hopped in our trusty Citroen and started driving north-west with a vague notion of ending up in the Loire, taking in whatever we could find along the way.

I’d been reading a book called The Road From The Past: Traveling through History in France by Ina Caro. In it was a chapter on the two pilgrimage towns of Conques and Rocamadour whose histories were particularly colourful. Both are stunning places to visit too. So after amusing ourselves in Conques we wormed our way further north, eventually making it to Rocamadour.

Rocamadour is an amazing village in the Dordogne that appears to have crawled up and clung by its fingernails to a steep cliff edge. It was once on the pilgrimage route, with pilgrims, mostly from the Albigensian crusade, forced to seek forgiveness at the shrines of Saint Armadour and the Black Virgin. These days, its beauty and history attracts tourists from all over the world. 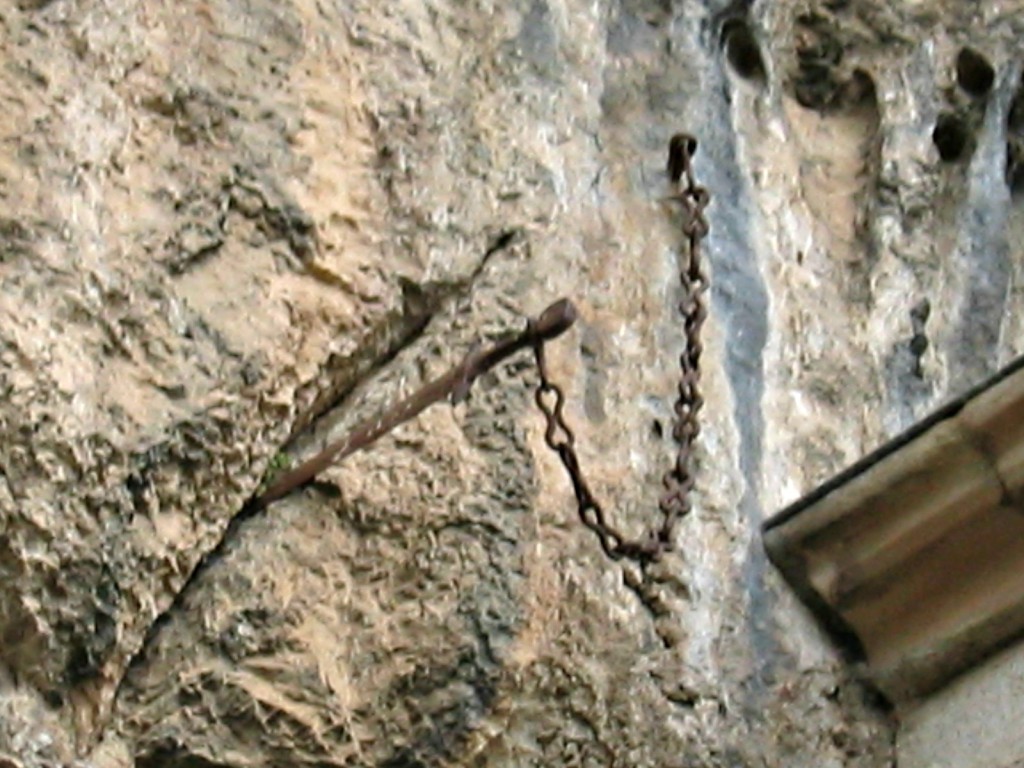 Durendal in the cliff face at Rocamadour

On our visit no one seemed to notice the decaying sword stuck in the rock face above the Shrine of Saint Armadour. Can’t say I blame them. It didn’t look like much, but the story behind it? Now that was something.

Olivia, the heroine of The French Prize, describes its history perfectly.

Roland was a paladin, one of the twelve peers of Charlemagne’s court. A soldier who fought legendary battles for his king, a Knight of the Round Table well before knights or the Round Table existed.

Mighty warriors have great swords, and for Roland, his was not Excalibur but Durendal. However, just like Excalibur, Durendal was blanketed in myth and mystery. The stories were endless. While the tale of the poisoned stream was the most popular—given that it was immortalised in the Song of Roland, the first and greatest of the Chansons de Geste, the epic poems of the twelfth to fifteenth centuries—there were many others.

Olivia’s favourite had Roland, with his dying breath, heaving the sword back into France where it miraculously lodged itself into a cliff face above the Notre Dame Chapel at Rocamadour in the Dordogne. Neither this nor myriad other stories were true, although she had no doubt Durendal had survived the ages.

Where it was hidden, though, was another matter.

Yes, Rocamadour’s Durendal is a big fat fake but so are plenty of other relics from the period. In the medieval scramble to attract pilgrims and the wealth they brought, many fakes were marketed. I lost count of how many nails from the True Cross we saw. I even saw a reliquary containing Christ’s foreskin. Another containing the arm of John the Baptist. But for me that didn’t detract from the wonder. Every one of them told a fascinating story.

There are other legends associated with Durendal. In the Song of Roland, Durendal is described as being embedded with all sorts of relics, including the “Some of the Hairs of my Lord, Saint Denise. Some of the Robe, was worn by Saint Mary” as well as other interesting bits and pieces. There’s also a claim that Durendal once belonged to Hector of Troy. In other words, this thing is precious.

Real or fake, I fell in love with the tale, and although I learned of many other French myths and legends this one stuck with me. Eventually, well after we’d returned to Australia, I decided to write about it. It was such fun reliving all our French journeys and writing about locations that I’d become so familiar with.

Much of the action of The French Prize happens in the Provencal towns of Rognes and Aix-en-Provence. Rognes is a lovely village and the house where Raimund takes Olivia is based on one in which a friend lived. The house had the most amazing cellars, enormous and carved out of the rock, and it was these that inspired the idea of Raimund’s archives.

Aix-en-Provence provided more inspiration. Walking the streets on market days was one of my favourite activities. The produce was beautiful, the wares interesting and occasionally intriguing, with the colour, smells and noise all adding to the experience. The restaurant on Aix’s magnificent main boulevard, the Cours Mirabeau, where Raimund and Olivia stop for lunch, was one we visited often.

Other scenes in the book also come from fond memory. The ruined chateaux of Les Beaux and Vaison la Romaine, with their rocky, perilous perches, gave inspiration for the chateau where, in the opening chapter, Olivia discovers La Tasse. Raimund’s drive through the glorious postcard-perfect scenery of the Luberon is one we’d also enjoyed. Olivia travels the same streets in Aix as I did, admiring its magnificent architecture, fountains, and the mansions of its 17th century Mazarin Quartier. Raimund and Olivia travel down the Péage (motorway) toward the ancient Roman towns of Arles and Nimes as we did, many times. The Mediterranean glitters in The French Prize as it did for us, beautiful and mesmerising.

The rest of the story – Guy of Narbonne, Le Tasse du Chevalier Gris and its related song or riddle, as well as the characters – all come from my imagination.

I can’t help wishing it was all real though. That Durendal still lies out there hidden somewhere, waiting to be found…